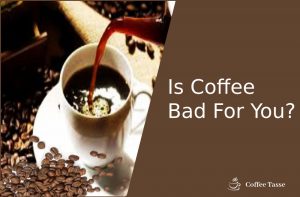 You have heard your mom said, “Stop drinking coffee. That doesn’t have anything good for your health”.

Just as you were ready to quit drinking coffee, there comes a TV commercial with a reputable health expert explaining the good benefits that drinking coffee has in store for you. With all the ‘factual’ information that the advertisement delivers about a particular brand of coffee, you then had a second thought about quitting because yo don’t want to miss the promising effects that drinking coffee can give you.

So which is which – to drink or not to drink coffee? Is coffee bad for you or it isn’t? Your confusion is not surprising. Hundreds of thousands of people around the world drink coffee without really knowing whether or not it is bad for their health. It is like using a facial exfoliant without even knowing if it will be harmful to your skin. You don’t want to be one of those people, do you? If so, you better be reading this entire article.

Caffeine is ‘psychoactive substance’ naturally found in coffee. For your information, caffeine is a kind of substance which belongs to ‘stimulants’. Stimulant drugs are capable of boosting brain functions.

As a result, a person who takes stimulant drugs gets more mentally active and alert. Certain prohibited drugs contain high levels of stimulants, enabling a user to stay awake for several days. Drinking coffee also has the same effect for most people.

As a stimulant, it boosts a person’s mind in order for it to keep functioning without rest at all. People who need to stay awake for a long period of time often find drinking coffee the number one solution against sleepiness. This can be a good option for some time but not all the time. Caffeine stops the function of ‘adenosine’ (an inhibitory brain hormone). Producing adenosine is the body’s natural way of saying that the time has come for the brain to take a rest.

Caffeine May Cause Sleep Disruption and Anxiety

As being mentioned earlier, caffeine may cause you to stay awake. In other words, it disrupts your sleep – your body’s opportunity to repair its damaged cells, which plays a big role in your overall well-being. Drinking too much coffee means you are consuming more than enough caffeine. Well, this is something you should simply take for granted. Listen to this closely – excessive consumption of caffeine is more likely to lead to sleep disruption. Caffeine acts as an awakening agent to your brain.

If you really want to improve your sleep, you should not be drinking too much coffee, especially around 2 hours before bedtime. By doing so, your brain will be able to release adenosine better. Aside from sleep disruption, may lead to anxiety. In addition to these, caffeine also causes heart palpitations as well as trigger panic attacks.

There is such a case as ‘overstimulation’. This commonly happens to people who have sensitivity to caffeine. Once a person’s brain or body get stimulated, he/she should allow his body to function. Otherwise, the heart will palpitate extensively, which is not really good for the body, especially to people who are hypertensive. You need not to be an expert medical practitioner to know that when your heart palpitates a lot, it is pumping too much blood for your body, which may lead to cardiac arrest, if you have clogged bloodstreams.

There is an addictive product, which you can easily buy in supermarkets. Yes. You are right by saying that it is no other than coffee. Coffee is addictive because of its caffeine content. This is the main reason why a lot of people find it difficult to stop themselves from drinking coffee. If you have been drinking coffee regularly, there is a big possibility that you have already been addicted to caffeine. However, that does not stop from drinking a cup or two. Often, coffee drinkers start from one cup until eventually drinking up to 8 to 10 cups a day.

This is because of the body’s tolerance to caffeine. Once your body gets tolerant to caffeine, it would ask for a higher dose in order to feel the same satisfaction that caffeine commonly has in effect. The addictive power of caffeine also makes it easier for a person to fall in love with chocolates. Is there any big deal with that? Yes, there is. Drinking coffee and eating chocolate multiplies caffeine intake. You know how unhealthy such addiction can be, don’t you?

When Addicted, Withdrawal Will Be Difficult

Being addicted to caffeine is no less than some other drugs in terms of difficulty in quitting. Caffeine withdrawal may have the same adversity as nicotine or alcohol withdrawal. When your entire body system gets used to consuming high dosage of caffeine on a regular basis and you suddenly decide to abstain from it, you are more likely to experience withdrawal syndrome symptoms. These include irritability, ‘brain fog’, headache, and tiredness (even if you haven’t been doing anything).

Is coffee bad for you? It can be or it can’t be. It depends on the frequency and amount of coffee you drink. Learn more about the effects of coffee in the body and know how you will enjoy drinking coffee.

This is Brian, your main author for Coffee Tasse. We Review & Guide through various Coffee Machine and Accessories for your batter morning. Follow me: Facebook,  Twitter

Coffee Tasse is reader-supported. When you buy through links on our site, we may earn an affiliate commission.