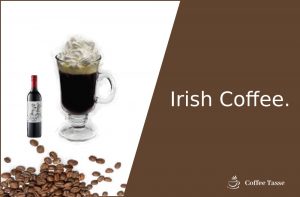 Irish Coffee is made by mixing Irish whiskey, hot coffee, and sugar together. Many recipes call for the sugar to be brown sugar, stirred, and then topped off with some thick cream. In the original recipe it was recommended that the cream not be ‘whipped’. However, many whipped cream drinks are sold as being ‘Irish Coffee’.

As with most drinks there are many variations and twists on the original recipe. The original drink, however, was invented by and got its name from, a man named Joe Sheridan. He was a head chef working in Foynes, County Limerick. He was originally from Castlederg, County Tyrone.

He conceived of this coffee after some American passengers got off a Pan Am flying boat back in the 1940s. The weather was cold and miserable and Sheridan added the whiskey to the coffee to help warm up the passengers. The passengers asked if what they were drinking was ‘Brazilian’ coffee and Sheridan answered that it was ‘Irish Coffee’.

Stanton Delaplane enjoyed the drink one day at Shannon Airport. He was a travel writer working for the famed ‘San Francisco Chronicle’. He was credited for bringing Irish Coffee here to the U.S. He worked at the Buena Vista Cafe located in San Francisco and began to serve Irish Coffee there in 1952.

Delaplane also worked alongside bar owners George Freeberg and Jack Koeppler to recreate the method of floating cream across the top of the Irish Coffee. During this testing and sampling session he nearly passed out from drinking it. They decided to enlist the help of the city’s mayor, George Christopher. He owned a dairy. He suggested that they let the cream age for at least 48 hours so it would float better across the top of the coffee.

Delaplane advertised his new drink by mentioning it often in his travel column. He had a pretty broad following all throughout America. Later on, after the Buena Vista had served up over 30 million Irish Coffees they all agreed that there is only one problem with Irish Coffee – it ruins 3 good drinks, which are Coffee, Whiskey, and Cream.

Ireland’s National Standards Authority published Irish Standard I.S. 417: Irish Coffee in 1988. While Coffee, Whiskey, and Cream are still the basic ingredients of Irish Coffee, there are many variations that exist today, mainly in the preparation. There are differences in the choice of coffee to use as well as the brand of whiskey. It is quite typical today to find espresso machines as well as automatic brewers being used to make this drink.

In Spain the Irish Coffee is served in 3 different layers – Whiskey on the bottom, Coffee in the middle, and Cream on the top.

A few bars in Southeast Asia have drink that is iced coffee and whiskey. Even though it leaves out the cream in many instances, they still refer to it as being Irish Coffee.

This delicious drink can warm you up when it gets cold outside. They even created a National Irish Coffee Day in its honor.

The Buena Vista Cafe daily serves around 2,000 cups of Irish Coffee. Counting from 1952 that makes more than 30 million cups sold.

While it is often the Buena Vista Cafe getting the credit for introducing Irish Coffee in the United States, Tom Bergin’s Tavern out of Los Angeles claims that Stanton Delaplane first brought that recipe there.

The earliest Irish Coffee reference to be found was published in an American Newspaper (El Paso Herald-Post) by Frederic C. Othman, back on October 17th of 1950. In it he wrote of his experience at Shannon airport drinking Irish Coffee.

Every year in Montgomery, New York, they host an Irish Festival there in honor of the Irish Heritage. They offer traditional Irish crafts, food, dancing, and loads of Irish Coffee. They hold the festival in Orange County Park which makes for a very serene setting where people can have fun and relax.

1. The basic way of making an Irish coffee is to heat the whiskey, coffee, and sugar without bringing it to a boil. top it off with cream and serve hot. The amounts of each ingredient can be adjusted to taste.

2. Another method is to pour black coffee into your mug, then add whiskey and one level tsp. of sugar. Stir it up until the sugar fully dissolves. The sugar also helps the liquid cream to float across the top. Add the thick cream and pour it out over the back of your spoon, holding it slightly above the coffee’s surface, raising your spoon gradually as you drop it. The cream will float on top of your coffee without mixing. You drink the Irish Coffee through your layer of cream.

One of the complaints that many of the un-impressed Irish Coffee samplers have is that their drinks are missing the taste of that rich blend of the nutty, slightly bitter coffee, with fiery whiskey and caramelly sugar that creates the wonderfully pleasing contrast to the loosely whipped cream that goes on top. A mediocre recipe with low quality coffee, cheap whiskey, and the spray-can type of cream just doesn’t measure up. The perfect Irish Coffee will have everything mentioned in the critique above.