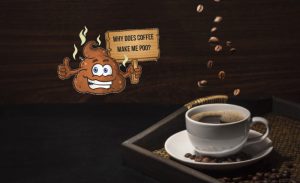 Best part of my day is probably when I wake up to a sweet, bright taste of coffee by the bedside. My mom used to make me one every morning and I still miss those days. The energizing smell is enough to make the day go smooth.

Also, due to constipation, I used to drink coffee to struggle less in the washroom. It sounds gross but let me be honest…

No doubt that coffee is like a strong wakeup call in every way. However, what makes that urge of going immediately to your bathroom after having a cup, ever thought about that?

Does it bother you because it’s a bit embarrassing at other places? Well, let’s then know everything related and also how to stop coffee from making you poop.

There are people who enjoy the bowel movement after having a cup of coffee to make their morning bathroom journeys less awful. However also there’s this other side of the crowd that feels extremely uncomfortable and almost run to bathroom which could be problematic. Having a normal urge is considered alright but if it is severe, the thing could be pretty serious.

Why Does Coffee Make You Poop?

There are several factors that could be the reason for coffee making you poop. Actually, there are different studies that find the problem occurring for a few reasons. Let’s take the researched route to find out what could be your reason.

The first reason could be due to contraction in colons that is caused by caffeinated or decaffeinated coffee. In 1998 there was a study proving this fact. The study even stated that caffeinated coffee can cause movements in colon 60% more robustly than drinkable water. It’s almost equal to the effect of a thousand kilo-calorie meal.

There was another six-participant study held stating that drinking coffee after a meal can help empty the stomach quickly. As soon as stomach gets empty, food starts transferring to the rectum. And this causes a bowel movement.

In a few individuals, the coffee can cause an increase in acid production. As a result, movement in colon and anus could be felt.

As a result, there can be bowel movement due to the release. While overall concept is still unclear, this could still be the reason why you are feeling that need to poop.

There are a few IBS patients who shared that coffee triggers the symptom of pooping. It often leads to diarrhea. And so, the patients are not allowed to drink coffee.

Also, there was a study in 2015 on IBD patients. And the result showed that 62% of the participant who did not consume coffee believed that it was provoking their conditions.

After infancy, around 65% of the world’s population suffers from not being able to digest lactose completely. The term refers to sugar in milk and other types of dairy. The intolerance of lactose may bring diarrhea. And so, it could be the added milk or dairy product in coffee that is making you poop after drinking.

Well, Here’s Some Solutions to Try!

There are a few solutions that I figured out from researching. It can help you reduce the urge of running off to bathroom.

There are several treated or inadvertent low acid coffee that can help you. The first type is basically an outcome of a special technique. It could take place before the roasting process or during it. And the results show a pretty less amount of acidic levels.

While if you choose inadvertent low acid coffees then the levels are naturally less. Usually, beans from Sumatra, Peru, Brazil, and Mexico are low in acid content. Even the beans from Arabic are less in acidic levels, and also, these are extremely delicious in flavor profiles.

Brewing in a Specific Way to Reduce Acidity…

If you opt for a slow-steeped cold brew coffee, then you’re choosing a 70% less acidity level. And so, make cold brews your new love. You can use the exact amount of beans of hot drip coffee. And still, you’ll be able to cut down acid.

Now if you are someone who’s just like me and can’t even think about not having a hot cup of coffee, don’t worry. There’s a way for people like us as well.

To avoid high acid levels, you must skip fine grind while brewing. Choose the coarser options instead. Think about buying a French press. This is a tool that can help you a lot with making fine brews both hot and cold using coarse grinds.

Using some sort of antacid in your cup can also help a lot. Calcium is an excellent example. And so, if there’s no issue with dairy, add some milk. It’s going to neutralize the acidity levels. Use fortified almond milk in this case since it’s a good source of calcium. However, if you want to skip milk then go for calcium powders. There are flavorless ones available.

Alkaline is also fantastic at neutralizing the coffee acid. So, if nothing seems to work, go for eggshell. Add some into your coffee and see if it works. This is one reason why Swedish egg coffee is so famous.

Go for Dark Roast or Half-Caff…

Not everybody suffers from this issue because of the acid levels. Sometimes it’s due to caffeine. Decaf is not excluded from the criminal list. It’s also a caffeine included stuff. Even with a less ratio, decaf still comes with 7mg of caffeine each cup. So basically, you still have to deal with 3% of caffeine even with drinking decaf.

Here you can go for two routes to get the problem out of your life. The first one is opting for darker roasts. It’s been said that darker roast ground is less dense. And so, the caffeine amount is pretty less here.

The second option is trying half-caff. This is for someone who doesn’t want to absolutely jump into decaf. Also, try having a meal alongside the morning cup. This will help a lot to diminish the caffeine effects. However, the meal you are consuming should have zero caffeine.

It’s also known that with regular consumption of caffeine, one’s body starts to build a resistance against it. So, you may end up waking one good day to find out that the negative sides are not showing anymore.

Sometimes the problems are dairy inclusion. This is quite common actually and all you need to do is stop adding any sort of milk into your coffee. There are several milk alternatives you can try instead. Go for coconut or almond and those types of non-dairy elements.

However, if you cannot absolutely resist the craving for creamy flavor, try adding syrup and non-dairy milk. There are lots of option that gives extra flavoring. Just pay attention to picking the right substitute.

Should You Avoid Caffeine Completely?

If this thing really tests your patience and you don’t want to be bothered at all, cutting off coffee might be an option to try. Go Ahead! However, the thing is not actually that bad, to be honest.

Let me clear out first that I’m not indicating IBS patients who are dealing with very sensitive digestive tracts or similar diseases. If you are suffering from such diseases, don’t drink coffee by any means.

Also, it’s absolutely a rubbish myth that consuming caffeine or coffee makes your colon lazy or dependent as you get older. Clear those weird doubts and just enjoy your coffee.

So hopefully now you know how to stop coffee from making you poop and why the thing actually happens. Caffeine stimulating your bowels isn’t actually that bad unless you take it negatively.

There’s no valid science behind what actually impacts the caffeine to make you poop. Some people don’t really have any such issues at all. They drink coffee and feel nothing like visiting the bathroom urgently. Usually, women experience such things more than men.

Although there’s nothing wrong with it, some serious diseases might be an exceptional case and so, being aware of this whole thing is not silly at all. Also, pooping is nothing unusual and it’s alright to feel an urge so don’t get bothered by it.

Anyways, as long as you have nothing serious going on with health, enjoy that cup of coffee and stop worrying about things that are bound to happen….