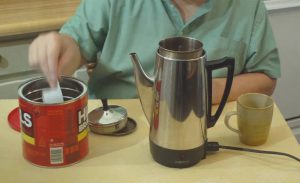 My neighbor was a self-respected housewife and I never knew what exactly she was proud of so much. She was popular for making the best coffee though. We used to hang out at her home after work whenever there was a chance.

One day she came to visit me at my place and was so surprised at how plainly I lived back then. There was nothing too fancy since I was just having a hard time moving out of my parent’s house. And then the next time she bought be a percolation as a gift. I realized that the lady was actually very thoughtful under that grumpy look.

Yes, so that was my first memory with an electric percolator and since today we’ll be talking about this equipment, I cannot help but share the little story. Hope You Didn’t Fall Asleep.

Well if not, let’s have a conversation on how to make coffee in a percolator electric. That’s probably one of the few things I’ve learned by doing regularly now…

Do you know that percolator is probably the most popular type of coffee maker until drip machine made a debut? No doubt today’s coffee-making gadgets are extra convenient that ensures single-serve features with trendy and classy looks. But this whole fact still has zero impact on the selling number of percolators, stocks are always out.

Once you have your hands on a newly-bought electric percolator without a manual, don’t worry! The use is pretty straightforward and anybody will enjoy their morning coffee making story.

Get to Know the Electric Percolator First!

Coffee grounds go through a stream and this process is percolation, Simple… Imagine a drip coffee maker with a pot that resembles a kettle and pump tube connected chamber. The created vacuum makes strong coffee brew. And that’s exactly what percolator looks like.

With boiling water, the bottom chamber creates a lot of air bubbles. These travel through the pump tube so that water can contact coffee grounds. Then coffee ground gets the pleasure of realizing its oils that runs back down to pot.

As a result, an infusion known as perked coffee comes alive. It goes all the way up to steam. Then coffee grounds are back into pot continuously. This lets the filter get strength. More than a few rounds keep on happening that initially results into the delicious output.

Making Coffee – What It Takes for One Luscious Cup!

Get grinds of coffee for the process. It could be done using a grinder or manually. Now time for getting the upper chamber, tube, and lid out. Six ounces of water goes into the lower chamber next.

There should be a line indicating the maximum level. Don’t try to cross that boundary. The water should stay quite lower from the upper chamber. Into the coffee basket, you need to pour one to two tablespoons of ground.

Time to add a filter now. There are available ones made only for percolator. You can also use the regular round ones with a punched hole. It’s not a compulsory step, however. But including a filter will help to keep the ground and coffee liquid separate.

The upper chamber has a hole in middle which will hold tube. Now right on upper chamber you need to situate the perforated top. Let the lid of percolator get placed. Plug it on and decide the brewing time. However, some machine does not have this time setting function.

Sit back and wait until the machine finishes its job. Once your coffee is ready, the percolator will switch off. And then you can bring your coffee cup to directly pour the delicious infusion into it. Bonjour!

The main in charge of this coffee-making process, who do you think it is? The coffee beans!

Yes, nothing is going to work out for a fantastic cup of coffee if you miss out on picking the best grade beans out there. And once you do, the reward will be a cup of complete delight that does not wastage your effort or time at all.

The ground level actually needs to be medium coarse. It’s the best level to make a great brew. Too fine grinds are okay to a few drinkers. However, there’s a chance of washing down of grinds into the coffee. And that could be quite unpleasant to drink sometimes.

And also, a too coarse grind for coffee will become quite hard to extract oils. The stream might end up providing a weak batch of coffee. So, have an eye on the grind consistency and customize it according to how you prefer.

Time for Some Calculations on WATER-GROUNDS-RATIO…

The water and ground ratio play lead role in this script of a perfect cup of coffee. Be sure to know the right ratio before you use. Too tight packing will end up in less extraction of coffee essence. In most cases, you should use around 6 ounces of water for one tablespoon of grounded coffee.

Boil That Water, But Don’t Make It Burning…

Okay, we all know the water needs to come to its boiling point and that’s when including coffee beans makes everything right.

Mind it that the too hot water can risk into burning entire infusion. It could end up in a bitter and burnt flavor. Some of you may start drooling by thinking about that bitter taste, but also there are folks who don’t really enjoy the burnt flavor.

So, the best thing here is to make the water boil somewhere between 198 to 204 Fahrenheit. Anything in between this temperature should be enough to get the best extraction in a percolator.

Percolator often comes with a mechanism of setting the right temperature. And so, you can enjoy a gentler brew using the apparatus quite easily.

Now, most of the electronic percolator comes with a set duration feature. And then there’s less chance of over circulation of perked coffee. However, if there’s no such system, then you need to keep the process attended.

Don’t forget about the percolator while excusing yourself on waiting. Make sure you are using time parameter in the right way for that perfect coffee flavor.

This is a tricky question, there’s no definite answer, to be honest. It entirely depends on how strong you like your coffee to be. However, it should never be above ten minutes, that’s the limit.

Anything more than that will end up burning instead of brewing with a dry taste. Depending on your taste of percolation, somewhere between 5 to 8 minutes is the right duration in most cases.

Some Myths You Should Avoid…

There are many arguments going on online and offline that may lead you to not buy one of this extremely handy coffee making genius apparatus. Most of the arguments are based on super wrong perceptions. To clear those out, I need to do something and here’s my take…

First of all, it’s not too strong, for most coffee lovers. You’ll find a lot of netizen complaining of how percolator is making their coffee extremely strong and unable to drink. However, they probably don’t understand that there are many, in fact, maximum coffee-lovers who actually enjoy their coffee being a bit on the stronger side. And so, if you are not afraid of a little bit of bitterness that washes off stress like magic, percolator is the right thing. Don’t get it if you also prefer a weak version of coffee, try something else.

The next thing I often hear about percolator is quite opposite of the first one. Some people say that the brew ends up being too watered. Well, probably their ratio isn’t right and they are just blaming the percolator. The tool is extremely popular for producing perked coffee. These are meant to provide that extra robustness and richness in taste. Sometimes it’s also the fault of brewing duration that leads to such unsatisfying weak infusion. So, before you jump into conclusion, check the ratio of water and ground you’re using.

The brewing process is very long and that’s an inconvenience. This is the next myth we need to clear out. You need to understand that percolating is a skill that needs some practice, precision and time. It’s probably meant to require a bit of time to extract the richness out of coffee. That is why the whole percolation method exists. If the timing bothers you, don’t look for richness and go grab some instant coffee instead.

To a few, the percolator is an outdated and nobody-does-it-anymore thing today. But if you are a coffee lover, there’s no way you’ll doubt this conventional style that enriches the taste so much better than instant ones.

Learning how to make coffee in a percolator electric is something you won’t achieve only by a few tries. It needs you to wake up and make your cup, for at least a few weeks to truly accomplish the taste of perked coffee.

And once you learn the trick, there’s no going back. Watch your stress, morning dizziness and demotivational thoughts walking out the door.