French Coffee, Why It Is Unique 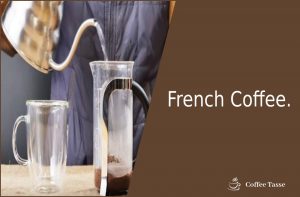 People traveling to France from America, Australia and other parts of the world are often taken aback by the difference in the coffee consumed there. The French savor a very robust coffee that is very strong almost like an espresso. They often wonder why people in other parts of the world drink “watered down” coffee. The culture of French coffee is unique. Drinking morning coffee in a sidewalk café is central to daily life. The traditional French person only drinks coffee with their breakfast. Breakfast is usually a pastry. If you order French coffee with dessert, you will probably get it after your dessert. With the number of visitors France gets annually, coffee is available at other times of the day. Perhaps the reason the French do not usually consume coffee after the breakfast hour is because of the strength of the coffee.

The French ground their coffee in huge batches. The coffee beans are stored in open barrels and are deeply roasted. There are several ways you can order French coffee, but keep it simple. If you order half regular and half decaffeinated with skim milk; you will be out of luck. Here are some examples of the coffee you can order in France. In comparison to the makers of American coffee this is strange. Americans do not roast the coffee beans as long, leading to a milder flavor. Americans ground their coffee in smaller batches and keep the coffee and the beans that are unroasted in air tight containers to keep the coffee fresher. There is no right way or wrong way to handle coffee. But the way it is processed as well as where it is grown have a definite impact on the taste of the coffee.

You can see from these examples that French coffee is deep, strong and bitter. To the French this is the way coffee is meant to be consumed.

People in France (and other parts of Europe) prepare their coffee in a “French Press”. It is a quick and easy way to make the strong brew. A press is a cylinder shaped container that has a top with a plunger and filter built in. Water is heated to hot (hot, not boiling) in a pot or kettle. The lid is removed from the press and measured coffee is placed inside. Then the hot water is poured directly on the coffee grounds and stirred. Let the coffee and water sit 3-4 minutes to brew. Screw on the top of the press and press the lid (plunger) down. The coffee grounds are pressed to the bottom of the container and held there. The coffee on top is then poured into the cup. To make the coffee weaker shorten the time it brews. To make it stronger add a minute to the brew time.

Even if one prepares their coffee in a press instead of a percolator, they will not get the deep flavor of French coffee unless they use the right coffee. Coffees “beans” are actually seeds. They grow inside a cherry like plant. The berries turn bright red when they are ripe. The seeds are removed and roasted. There are two types of coffee beans and the Robusta and the Arabica. The Robusta coffee beans are the type used in French coffee. They contain high volume of oil, which contributes to the taste. The Arabica coffee is almost oil free. Where the coffee is grown and the environment and climate of the area will determine if the coffee is Robusta or Arabica. Before roasting the coffee beans are checked by master coffee blenders and sorted according to their type.

Starbucks introduced America to the taste of European coffee, made with rich oil filled beans. That is when most Americans learned there was a different type of coffee in the world, and a different way to prepare it.

Most restaurants in France have decaffeinated coffee available, though it is not real popular in France and may come to you in dry instant coffee form. You will rarely see it on the menu. If you would like to order your un café decaffeinated, you will order “un cafe -de’ca”.

If you visit a traditional French Café’ you may see people drinking their coffee from a large bowl rather than a cup. This is the way coffee was originally served. Many French people still use a bowl instead of a cup for their coffee. The bowl is held in both hands and sipped from the bowl.

Though the coffee at Starbucks originally was the French style, there are some “do nots” to do with true French coffee.

• Do not blend different coffees

• Do not add specialty flavors like peppermint, pumpkin, hazelnut or coconut

• Do not add whipped cream

Some French coffees do add chocolate, but they do not add whipped cream or sugar. Sometimes they use a dark slightly bitter chocolate. This came to be when bakeries in France started adding coffee to their desserts. The taste became popular so some French coffee makers incorporated it into the making of their coffee drinks.

No matter how you enjoy your coffee, you owe it to yourself to try French coffee. It is Fantastique!