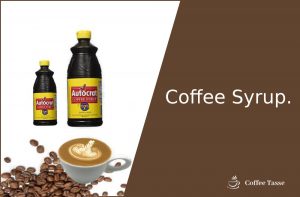 Coffee is something everyone loves. It not only tastes good, but also it gives a positive energy and refreshes you. Whenever you feel tired you go for a cup of coffee. Coffee is one of the most liked flavors after chocolate and vanilla for instance some people like to have coffee cake, coffee flavored toffees, coffee syrups or coffee ice creams etc. But coffee syrup is something which can be used to flavour milk or on ice creams, cakes, puddings etc.

In actual coffee beans are red in color till they are with the plant but, they change their color after ripening and getting roasted and so as its taste and acid level changes. Coffee is roasted very carefully so that neither it remains unripe nor it burns as both of them taste very bad. Coffee after roasting is packed either directly or it is converted into powder and then sold. Coffee syrup is generally made from coffee granules which taste better than the powdered form. It is not necessary for you to buy coffee syrup rather you can make some on your own.
Homemade way
Coffee syrup basically has only two ingredients coffee and sugar. Almost equal amount of both these ingredients are added together and both of them simmer continuously on very low heat. The end result is thick homogenous syrup which can be further used for flavoring milk, ice creams, puddings, cakes, on cream and many more. Coffee syrups have sugar as its natural preservative and hence you can save the syrup in bottle for a long time.

What actually big brands do to make their syrups liked by everyone in the world? They say that the process is very simple. Famous Brazilian coffee is taken and is roasted along with some other nuts and butter so that smoke of every ingredient get smoked into each other naturally, after that the beans are given rest for almost two days. After the resting procedure, beans gone through a process known as cold brewing process in which the flavor and everything else from the coffee except the acidic property of coffee. Then this coffee is drained slowing through sugar slowly taking almost 3 – 4 hours. The end product is a thick caramelized syrup.

Waffle made from Coffee Syrup

Coffee syrup when added on any dessert makes the dessert even tastier. Either you make a chocolate flavored brownie or toffee, the taste is even better if coffee syrup is used in it.
The top rated coffee dish which you can make at home easily is coffee shake, just you need to mix coffee syrup in a glass of chilled milk and your coffee flavored milk is ready.
Another recipe is the orange flavored coffee, just you need is a glass of almond flavor milk, some sugar, coffee syrup and fresh orange juice, this smoothie will make your day if taken at breakfast. With fresh and soothing flavor of orange and coffee you will feel boost up.
Chocolate and coffee together is a perfect and powerful flavor. Next recipe is based on this combination only, in a glass of coconut milk, add some cocoa powder along with this coffee syrup, what you get is a dynamic smoothie which is great for those who work out.
You can add this syrup in almost every drink or any smoothie. As it goes well with other flavors as well, you can add it with vanilla or butterscotch flavors as well.

Any normal coffee syrup has 105 calories in it. Because of high sugar content in it, it has quiet large amount of calories but as it is taken in very small quantities so the sugar content and hence calories is balanced. Carbohydrate in it is around 23gm which is not a big deal at all. Now days coffee syrups without sugar or simply you can say sugar-free syrups are also available.
Coffee has many advantages as we know, it helps to keep us awake because the cortisol it contains, a hormone which keeps the human body awake. So a cup of coffee is just enough to keep you working on busy days. Along with this various health benefits are seen if you consume a cup or two daily. It helps to make the liver even healthier and also it keeps cold and coughs away.
If you are working out than wait and drink a cup of coffee as according to various surveys, that coffee helps to increase stamina and fatty acids and fat is burned more quickly. Along with this there are many other health benefits of coffee.
It is not recommended for kids to consume coffee along with this too much consumption of coffee by any adult is also not good rather it has bad health effects. Coffee has high caffeine content which makes it unfit for drinking for kids. Also coffee should not be consumed before going to bed or at night as it has the property of waking up and we don’t want to keep you awake the whole night.