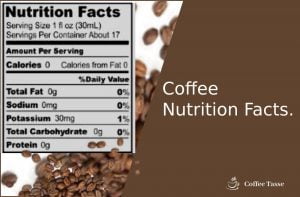 How Many Calories are in My Cup of Coffee?

Have you ever wondered how many calories are in each cup of coffee? I used to think there were zero — people had told me that. But then coffee grows mold if left alone for long enough. I’m pretty sure the mold needs some sort of energy to grow.

So coffee must have calories, right?

The number of calories in your coffee depend very much on how you like your coffee.

If you are on a diet or wish to start one, you should know that black coffee has the lowest amount of calories.

100 ml of black coffee will contain only 1 to 2 calories, as it does not contain any fats, proteins, carbohydrates or traces of any macronutrients.

The size of your cup will also affect how many calories your coffee portion has.

If you choose to add milk, cream, sugar, or other sweeteners, they will each the number of calories in that cup of coffee.

If a cup of black coffee contains 2 calories, you will be amazed to find out that a medium-sized Latte contains a staggering 125 calories, of medium size.

Even the non-fat Latte still has 95 calories, and the Reduced Fat Latte has 114 calories, not a large difference from the first version.

Thus, no matter how you turn it, black coffee always has the lowest number of calories.

If calories are of no matter to you, then you can serve the coffee the way you like it.

But if you are a person wants to minimize their caloric intake you need to know how many calories your coffee contains.

Returning to our 100 ml of black coffee, medium strength. Are there nutritional benefits as well as a low calorie count?

The sodium levels are very low, being present only as a trace.

But, do remember that the type of water used to brew coffee may also influence the quantity of these elements in the final drink. It matters if you used a soft or hard water, as calcium and magnesium levels can modify.

Also, it matters the type of coffee used, where it came from, how it grew, and how the coffee was processed these are the basic coffee nutrition facts need to keep in mind. Thus, as anything else, the information regarding the concentration of certain minerals in coffee may vary, the previous data being just a rough guide.

You probably heard rather often that the consumption of coffee leads to dehydration. This is because coffee is a diuretic.

Diuretics cause our bodies to flush water out instead of retaining it.

Well, you will be surprised to know that a cup of black coffee contains as much as 95% water. Thus, if the beverage is consumed with moderation and excesses are not made, it will not affect the level of hydration of the body. Having this in consideration, studies showed that a cup of coffee will contribute to the daily balance of the organism’s fluids which is the main coffee nutrition facts.

According to 2014 studies, the consumption of caffeine, contained by as much as 5 cups or normal caffeinated coffee, will not lead to dehydration.

Of course, coffee will still act as a diuretic, but it was proven that this effect last for a very short period, and it is insufficient to unbalance us greatly.

As well, coffee consumed with moderation will not change the total amount of water in the body or the distribution of fluids. And that coffee consumption does nothing else but to contribute to the body’s necessity of fluid intake. Thus, avoiding coffee just to make sure that the body’s fluids are undisturbed is an unfounded belieft.

This is Brian, your main author for Coffee Tasse. We Review & Guide through various Coffee Machine and Accessories for your batter morning.

We use cookies on our website to give you the most relevant experience by remembering your preferences and repeat visits.
Read More Accept
Manage consent

This website uses cookies to improve your experience while you navigate through the website. Out of these, the cookies that are categorized as necessary are stored on your browser as they are essential for the working of basic functionalities of the website. We also use third-party cookies that help us analyze and understand how you use this website. These cookies will be stored in your browser only with your consent. You also have the option to opt-out of these cookies. But opting out of some of these cookies may affect your browsing experience.
Necessary Always Enabled
Necessary cookies are absolutely essential for the website to function properly. These cookies ensure basic functionalities and security features of the website, anonymously.
Functional
Functional cookies help to perform certain functionalities like sharing the content of the website on social media platforms, collect feedbacks, and other third-party features.
Performance
Performance cookies are used to understand and analyze the key performance indexes of the website which helps in delivering a better user experience for the visitors.
Analytics
Analytical cookies are used to understand how visitors interact with the website. These cookies help provide information on metrics the number of visitors, bounce rate, traffic source, etc.
Advertisement
Advertisement cookies are used to provide visitors with relevant ads and marketing campaigns. These cookies track visitors across websites and collect information to provide customized ads.
Others
Other uncategorized cookies are those that are being analyzed and have not been classified into a category as yet.
SAVE & ACCEPT